Photosynthesis is the process where light energy (e.g. sunlight) and water is utilized to convert inorganic nutrients (e.g. fertilizers) and carbon dioxide to carbohydrates (plant biomass) and oxygen. Seemingly all forms of life on Earth depend directly or indirectly on photosynthesis as a source of inorganic matter and energy for their metabolism and growth.

In plants and algae, photosynthesis takes places in specialized cellular organelles called chloroplasts (figure 1) or photosynthetic lamellae in cyanobacteria. Photosynthesis is traditionally divided into two stages, the so-called light reactions and dark reactions. These reactions are both spatially and temporally (though not always the case) separated.  In the light-dependent reactions, which occurs in the thylakoids, light energy (photons) is absorbed in proteinaceous reaction centers, which excites chlorophyll molecules resulting to the generation of excitons and electrons, which are transported through a series of electron transport carriers – providing a biochemical reductant nicotinamide adenine dinucleotide phosphate  (NADPH2) and a high-energy compound adenosine triphosphate (ATP). In the dark reactions, which take place in the stroma, NADPH2 and ATP are utilized in the sequential biochemical reduction of carbon dioxide to carbohydrates.

Figure 1. A simplified illustration of the light and dark reactions of photosynthesis in chloroplast (Buchanan et al. 2000)

The photosynthetic apparatus is very similar to solar cells in the aspect that light energy is converted to electrical energy (in the case of solar cells) and chemical energy (in the case of photosynthesis). In photosynthesis, the very primary step begins with light absorption at the light harvesting complexes (HLC). As shown in figure 2, energy from photons of incident photosynthetically active radiation (PAR) are absorbed (absorbed photon flux, JABS) in pigments located in photosynthetic antenna of photosystems 1 (PS 1) and photosystem 2 (PS 2). The routes of this absorbed energy can either be trapped (trapped exciton flux, JTP) and transferred to reaction centers (RCs), which is eventually used in electron transport (electron transport flux, JET) or dissipated (dissipation energy flux, JDI) in the form of heat or fluorescence. This phenomenon of energy absorption (light energy) and transformation (heat and fluorescence) relates to the first law of thermodynamics (also known as conservation of energy), which states that energy is neither created nor destroyed but just changed from one form to another (i.e. transformed).

Figure 2. Schematic representation of main energy pathway in the light-dependent reaction of photosynthesis. (Stirbet and Govindjee. 2011)

However, like all energy transformation, no energy conversion is 100% efficient (i.e. no one form of energy will be completely transformed or converted in another form of energy), there will always be losses in the energy transformation (or conversion). In figure 2, not all the amount of absorbed energy will be converted (or used) in the energy to transport electrons through the electron transport chain. This observation is clearly defined by the second law of thermodynamics, which simply states that, in all energy conversions, some energy will be lost and wasted. To fully understand the usefulness of these photophysical concepts to photosynthesis (algal photosynthesis), a closer look at the complementary (and competing) processes of the initial steps of photosynthesis is presented in figure 3. 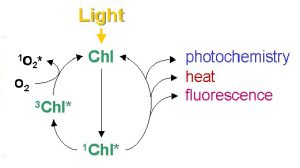 Figure 3. Simplified schematic diagram of excitation and the complementary (and competing) pathways of de-excitation of chlorophyll molecule. (Misra et al. 2012)

When a photon is intercepted by chlorophyll molecule, its energy is raised from a ground state to an excited state. This excited state is a high energy and unstable state that the system has a natural tendency to return to the ground (stable) state. When an excited chlorophyll molecule returns to the ground state (low energy state), a fraction of its energy reaches the proteins in the chloroplasts and successfully initiates photochemistry (P) while some fraction is lost to fluorescence (F) and others are dissipated (D) due to inefficiencies and wastage from damaged photochemical centers by too much light. In a healthy photosynthetic cell, when nutrients are not limiting, 80% of the light energy at low illumination may be used for photochemistry, thus lowering the fraction of energy lost to fluorescence and dissipation.  If a photosynthetic cell is exposed to excessive light than what is required for photochemistry (P), the fraction of energy (quantum yield) of photochemistry decreases and one might assume that a larger fraction of the absorbed energy would then go to fluorescence and wastage. However, photosynthetic cells are equipped with mechanisms that manage excess absorbed energy via a regulatory process called non photochemical quenching (N) through metabolic feedback mechanisms. In line with the conservation of energy (transformation and conversion of energy) the sum of the fractions of energy of these complementary processes must be unity such that:

In vivo chlorophyll fluorescence was first used in the 1960s as a means of estimating phytoplankton chlorophyll without the need of extracting the pigments. In the mid-1980s, the incorporation of “modulated” (pulse amplitude modulation or PAM) measuring system to basic measuring devices has been one revolutionary modification in the application of chlorophyll fluorescence measurements. Since the mid-1990s, chlorophyll a (chl a) fluorescence measurement using pulse amplitude modulation fluorometers has become widespread in monitoring photosynthetic performance of microalgal mass cultures (figure 4).

Chlorophyll fluorescence has gone a long way from its apparently purely physical nature to its application in plant physiology and algal biotechnology. Since the inception and major developments in chlorophyll fluorescence measurements, the method proved and provided a rapid, non-invasive, reliable, useful and real-time means to estimate the photobiochemical activity, productivity and monitor environmental constraints on photosynthetic activity.